DO PRODUCT PLACEMENT? HERE'S HOW TO FUTURE-PROOF YOUR BRAND

Viewpoint: Those Product Shots Get Old Fast, So Give Consumers Something to Marvel at on Repeat Viewings

Hello, my marvelous, marketing marsupials! Its time for another come-to-Jesus talk about what you're doing wrong when you think you're doing it right with brand integrations.

Please step into my time machine. It is 1987, and you are watching Oliver Stone's brilliant movie "Wall Street." Gordon Gekko, the super-rich evil guy played by badass Michael Douglas, is on the beach near his house and wants to call his naughty sidekick Charlie Sheen, so he whips out his Motorola Dynatac wireless phone that is so heavy it would break his big toe if he dropped it. Did the integration sell any phones? Maybe? Was the placement/integration relevant a year later? Nope. Samsung handsets did the same thing with the "Matrix" sequels. Guess what? Same result.

Roll with me. In "I, Robot" Will Smith rocked a concept Audi car in a key chase scene the same way Tom Cruise sped his factory-fresh Lexus away from the bad guys in "Minority Report." But were they soon-to-be-released models? No. What did those auto manufacturers do? They placed the brand above any specific model. If Motorola had been forward thinking, it could have tapped the creative genius of its designers and handed Michael Douglas something approaching a Razr that was prominently branded. (Think about how this could have an even greater impact in sitcoms and one-hour dramas that enter syndication.)

Now I know "I, Robot" and "Minority Report" were science-fiction movies, but hear me out. Auto manufacturers have learned from national auto shows. Concept cars generate excitement, but a trade-show exhibition area is visited by, what, 50,000-plus people in a week, a couple hundred thousand online? Now amp that bad boy into a feature film with a major star that is released on 3,000-plus screens on a major holiday, and then internationally, then on pay per view, DVD rental, DVD sales and, finally, broadcast ad infinitum like you just don't care.

All right, "Wall Street" was released in 1987, so are there recent films in which brands missed the opportunity to future-proof themselves? Yes my possums. 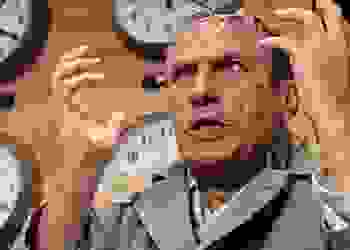 WHY YOU'RE SQUANDERING MOVIE INTEGRATION OPPORTUNITIES

Brett Renwick Goes Full Howard Beale to Explain Why Brands, Filmmakers and Agencies Are Getting It Wrong

Brands, this is your come-to-Jesus talk.

I'm going to go Howard Beale on you right here: "I do branded  entertainment for feature films, and all I see is wasted opportunity,  and I'm mad as hell, and I'm not going to take it any more!"  Branded-entertainment integration opportunities abound each year, but:

a) Your agencies don't move quickly enough and don't  have the expertise to evaluate the long-form narrative (I'm talking  beyond the 30-second spot);

b) You are not willing to step outside of your comfort  zone even though every year McDonald's, auto manufacturers and a handful  of brands break through the clutter and speak directly to your  customer;

c) You actually get more value for your "buy" because  the integration is evergreen, which means it lives through the  theatrical release, DVD, streaming and broadcast ad infinitum.

Let me break this down for you: Brand integrations are not just for the  bonanza tentpole and huge sequels; they can also be for small-to-medium  releases. Consider a very basic piece of math: Good movie plus good  promotions equals good box office. There are critically acclaimed films  that did not reach their domestic box-office potential but might have if  they had promotional partners. "Burn After Reading" did not engage  promotional support (shame on you SanDisk), only doing $60 million,  despite having Brad Pitt and George Cloney! "Cloverfield" was shot by  mister secretive micro-manager J.J. Abrams and only did $80 million.  "The Wrestler" did $26 million -- can you say Icy Hot, Advil, Ace  Bandages, Tiger Balm, Bed Head. "Vicky Christina Barcelona" won an Oscar  for Penelope Cruz but only did $23 million. Anyone call Iberia Airlines  to do a sweepstakes? Psst, Penelope Cruz is a L'Oreal spokeswoman, and  the marketer did nothing to support the film but run free-standing  inserts to promote a product with her likeness during the theatrical  release.

Feel my rage? Don't get me wrong, there are some films that are  difficult if not impossible to find promotional tie-ins for, such as "No  Country for Old Men" and "There Will Be Blood," but for every tie-in  I've ever done, I've increased the attendance for a movie.

But brands have a herd mentality when it comes to tentpoles and big  sequels, so the problem becomes, how can filmmakers get their support to  "trickle down" to small- and medium-sized films?

Increased ticket sales and brand recognition can happen with the aid of  brand integrations and promotions if the following criteria are met:

Filmmakers:
1. More of you need to prove you have an appetite for  all types of integrations, especially when brands want to blow out their  exposure. Case in point: "Up in the Air," which featured Hilton and American Airlines prominently. Slam-dunk.

2. You are not skilled in creating, pitching and signing these deals. So hire a professional.

3. Don't wait until the production start date is six  weeks away to do these deals. Like your production, big brands don't  turn on a dime, either.

Brands:
1. You need to set aside a bucket of discretionary  funding for the right small- to medium-size film venture that suddenly  pops up instead of waiting years for a huge tentpole. Be more  opportunistic; as 2009 showed us, if you stay on the sidelines along  with your competitors, no one gets noticed, and private-label brands  will increase their market share.

2. Brands that have not done integrations need  to view them as a marketing vehicle that extends their messaging in a  fresh, relevant way to consumers.

3. Brands will actually get more bang for their buck if  they spread their promotions around several small-to-medium pictures  that will avoid being lost in the noise and clutter of the tentpoles,  with their multiple big-spending brands.

4. Creative ideas are the engine of the best brand integrations. It's not as easy as taking Old Spice guy Isaiah Mustafa and writing him into a romantic comedy as the "Old Spice" guy (but I could make it work).

5. Ask the distributor what its release strategy is. If  it's a small film that is a good fit for your brand but its only being  released in the top 25 designated market areas, then maybe you should do  a regional radio promotion with movie-pass giveaways that need to be  retrieved from the retailer of your choice -- think outside of the  national spot buy.

Agencies (especially AORs):
1. No one who works for you knows how to break down a  screenplay or evaluate what the finished property will look like, so  engage someone who does.

2. Pick up the phone and call your clients. See if they  want to pursue a movie opportunity instead of having meeting after  meeting after meeting internally, leading to months of inertia.

4. In the first conversation, be upfront and tell people like me who do placement deals that you don't have the budget.

Wake up and smell the film stock! There is a ton of opportunity being  produced by the dream factory that 99% of you are not taking advantage  of.